: Joining the wave of protest demonstrations on the issue of Batla House ‘encounter’, dozens of students from different colleges and universities of today organized a protest march under the banner of Students’ Islamic Organisation of India (SIO), Delhi Zone to reiterate the demand of judicial probe into the case.

In a public meeting followed by the protest march, SIO National President, Suhail K K said, “we once again demand for judicial enquiry into the case of Batla house ‘encounter’ by a sitting judge of Supreme Court at the earliest”. He further demanded to stop the communal witchhunt of Muslim youth in the name of fighting so called war against terror.

Speaking on the occasion, senior journalist and Independent filmmaker, Satya Sagar said, “The case of Batla House is just a tip of iceberg. Such encounters and communal witchhunt are going on everyday basis throughout the country and not being even reported in the media”. He called upon the gathering to come out and fight for justice and to stop terrorizing in the name of fighting terror. He also said, “We have to also raise the issues of and Pune bomb blasts, which have clear signals of involvement of Hindutva Terror outfit in those cases”. 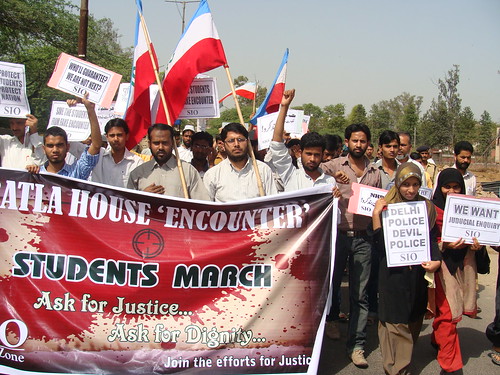 Mujtaba Farooq, National Secretary of Jamaat e Islami Hind and Dr. Tasleem Rahmani, President, Muslim Political Council of India in their speeches also demanded for a time bound judicial enquiry. On the similar lines, All India Students Association (AISA) while lambasting UPA govt. and Delhi Police through a public statement reiterated its demand for a time-bound judicial probe into the Batla House ‘Encounter’.