"Post-babri descision and the pathway for muslims" 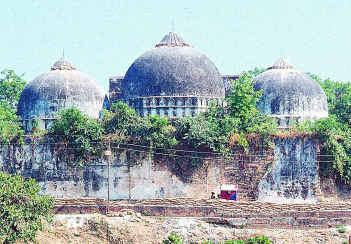 The greatest peace making event,unprecendented in the annals of history is the treaty of hudaibiya.It has a lot of lessons for all the muslims.The greatest visionary who had his eyes beyond the far reaching effects of the treaty,the benefatcor of humanity and the epitome of peace Prophet Muhammed *(saw) has set an explemery example for all times.the treaty of hudaibiya had those terms which were apparently humiliating to the muslims and partial towards the quraish,but still the Prophet (saw) keeping in view for peace to prevail agreed to all the unjust terms of quraish,which the companions of the caliber of hazrat Umar(r.a) couldnot hold back.He withold prophet (SAW) by beared and asked "O Prophet of GOD Are you not the prophet?....Are we not muslims?...Are these people not Unbelivers?....Then why should we contract with them as inferiors ....."
hazrat Ali(r.a)was writing the treaty was also enraged but in obedience to Prophet (saw) kept writing the unjust terms

The intregity put to test
The fifth clause of the treaty was "if anyone from quraish goes to madina without the concent of the party he would be returened but the muslim coming to makkah from madina willl not be returned".No sooner the clause was return ,Abu jandal,son of the Quraish representative Suhail came in chains badly beaten appealed to the Prophet (saw) and muslims to not send him back to makkah to face oppression,also Abu Busir utbah bin Usqaid who fled from makkah to madina, both were returened to makkah abiding to the terms of the treaty.Thus Prophet (saw) kept his words.

The muslims today all over the world are facing ignominy and each decade is bringing new challennges for muslims.For muslims in the last decade of 20th century brought great humiliation with the demolition of Babri masjid and with the start of 21st century the event of 9/11,has brought greatest challenge, for Islam is sterotyped with terrorism and building up of a popular perception that "All muslim are not terrorist but all terrorist are muslims".This sound even echoed in the Indian media special the serial trains bombings in Mumbai and subsequent bombings throughout India.many muslim developed a victim mentality and apologetic nature some even went to the extent of hiding their identity.
The dawn of the new decade 2011,may be marked by thge post-decision about babri to be declared on 24th seprtember 2010.The diabolical forces of india specially the "Sang parivar" RSS and VHP have started campaigning and are bent on disobeying the descision if it is opposed to their agenda.
Only GOD knows what will be the descision,whether it will be further postponed or given in favour of right wing or muslims.If it is post poned it will be in favour of BJP because they will have an issue lingering to serve their political interests,whereas the VHP,RSS etc are opposed to these and they want descision at the earliest in their favour to build their international spiritual centre of hindus and also source of great finance.

The pathway for muslims
Muslims in India have put their trust in the judiciary and have shown their will to abide by the descisions of allahabad high court.But still there is apprehension about what will be the attitude of muslims if the Allahabad high court gives descisions opposed to their hopes.Should the muslims vehemently opposed it?? ,resist protest and disobey like the sangh parivar??The answer is once again in the historical treaty of hudaibiya.We muslims once have given our word will never turn away from it like our counterpart,otherwiase no difference will lay between thruth and falsehood.Though the terms of hudaibiya were most disgusting but in the larger interest of making peace and looking beyond the narrow terms of treaty Prophet (saw) had an eye on the far reaching implications of post-hudaibiya victory and Qur'an also witness it as the manisfest victory(Quran 48:1).

Muslims should have the eye on the post developments which can happen if we are consistent and truthful to our words.The whole world will remember the historical event and will witness that these muslims kept their words,even at the stake of sacrificing their beloved mosque.It will and can open the floodgate of people entering Islam in crowds and muslims can say confidantly that we were the people who stood with our word wanted peace for Islam stands itself for peace.

The intrigue of diabolical forces is getting exposed day by day,their own people have lost confidence in them,they have become victims of their own contriving and they will be forsaken.Its the sincere request for the Indians muslim youth and students not to get provoked and be consistent with their duties as "Witness unto mankind",the forces of evil are planning and Allah(swt) too is planning and Allah (swt) is the best of the planners.