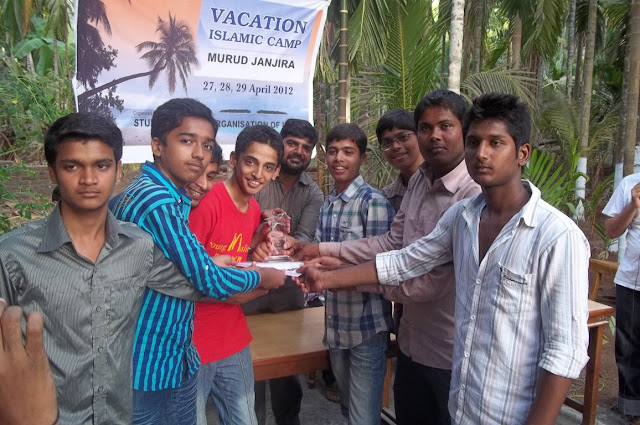 On 27th Apr-2012 at around 2am with the Grace of Allah (S.W.T.) a Historical Journey of VIC-2012 from Mumbra towards Murud Janjira began .Along with 37 Delegates and 21 Volunteers and Speakers both from Mumbra and Bhiwandi. Bus moved from Mumbra-Tanwar Nagar JIH office after Waving SiO-Flag by Janab Zafar Ansari Sahab (Ameer-e-Maqami JIH-Mumbra).

Day-1 (27th Apr-2012):-With the first foot on Murud all had their Namaz-e-Fajr at Kashid Beach & then enjoying the sceneries on the way headed towards Cottage “APNA GHAR”. Soon after reaching Apna Ghar Volunteers took control over whatever work been assigned them. Meanwhile Our VIC-Incharge Br. Minhaj Syed formed 5 groups each of 7 Delegates and a Group Leader .Each groups given their rooms, where they were asked to get fresh. After Having the Breakfast everyone was asked to assemble at the courtyard to attend the programs. Program started with a speech by Janab Zafar Ansari Sahab (Ameer-e-Maqami JIH-Mumbra), in his speech he explained our true value and position as Human being on Earth, main objectives of our creation and often told delegates that you all are the handsome of lucky students to whom Allah had selected among thousands and lakhs other. Taking towards the event of Adam (A.S.) clarified that Shaitaan is our true Enemy.

Next Br.Minhaj Syed (VIC-Incharge) addressed Delegates and their Group Leaders some important and strict instruction. He also explained 3-Days VIC schedule in short.
After that Br. Shaheen Khalokhe (President SiO-Bhiwandi) conducted some group activities like 1.Arranging the items according to its necessity, 2. Best possible answer, 3. Blindfold hurdles crossing. Then Break for Namaz-e-Juma, Lunch and Rest. With this first half program for the day ended.
Process for the day-1 restarted again with a Lecture of Br. Abdussalam Malik (Member of DAC-Mumbai Division & Member of  ZAC-Maharashtra South Zone) on “Tauheed, Islam Ki Buniyaad”, in which he told that we should believe in Allah the Supreme power. He explained the topic by giving an example of Ismaail (A.S.). He told Namaz is necessary to develop our believe in Allah, one should offer namaz with full concentration. He even pointed to one’s carelessness if he reaches late for Namaz or does’nt offer namaz on time.


Then there was break for Namaz-e-Asr.
After this all Delegates & Volunteers moved towards Murud Beach to Play Tug-Of-War. In the end over there all forming a big circle one by one gave their short introduction. Then returned to Cottage for Namaz-e-Magrib & Namaz-e-Isha.
“The Ideal Role Model “was the next topic Highlighted by Br. Ziya-ul-Islam (Asst. Webmaster SiO-India & Member of DAC-Mumbai Division) in which after asking delegates Role model and other Question made it very clear that Prophet Muhammad (P.B.U.H.) should be our Ideal Role Model. And hence we should follow him, his Sunnah including most important Dawah.
Break was given for Dinner with parallel Video Show. Day Ended with an Examination regarding what all topics has been covered so far.

Day-2(28th Apr-2012):- Day Started with Namaz-e-Fajr after that all Headed towards Eid-Gaah. On the way there was a Marathon race which ended reaching the destination. After enjoying the nature from Eid-Gaah Janab Zafar Ansari Sahab (Ameer-e-Maqami JIH-Mumbra) gave Dars-e-Quraan with its end he asked us to offer Namaz-e-Ishraq. Soon After that Br. Javed Shaikh (Ex. President SiO-Mumbai Division) showed some exercise.
All Returned to cottage “APNA GHAR” by taking a morning walk, enjoying nature, Mango Trees and Biscuits on the way. Immediately breakfast was been served.

Next session was a speech on “Quraan-Meri Kitaab Mera Rehnuma” by Br. Kamraan Baig (President SiO-Mumbai Division) in which he told that Prophet Muhammad (P.B.U.H.) was Allahs Best creation; again he’s been tested everytime. Also Quraan is last book for mankind to get out from blind faith.
After this Janaab Abdul Waheed Shaikh Sahab (Ex. President SiO- Mumbai Division) covered topic “Ibadat Ka Sahi Tasawur”. He explained that Ibadat means true way of life to live as told by Allah. He clarified that everything is planned by Allah & it doesn’t change. 24 x 7 we are Allah servant. He asked us to make some efforts to do something for others too rather than doing every time everything for ourselves.

Br. Javed Shaikh (Ex. President SiO- Mumbai Division) conducted next Lecture on “The Companions”, in this topic initially he raised some questions regarding the role models of Delegates. Then Explained some good stories & qualities of sahabas and their life style. He told that these are the Real Hero’s who’s only aim & motto was to sacrifice their life for Allah to do something for Islam. To gain Jannah by whatever way it may be.
Break was provided for Juice, Then Janaab Abdul Waheed Shaikh Sahab (Ex. President SiO- Mumbai Division) in the topic “Naujawani Ki Umar-Taqaze, Challenges Aur Ehtiyaat” highlighted the current issues of youth and the reason for the same. He explained it by giving very good scientific and Islamic aspects for his comments. After a very long and good discussion asked Delegates to clarify their Doubts in personal & he got good response. Many came up with their personal issues & doubts.
Lunch then Namaz-e-Zohar and Namaz-e-Asr. Soon after this all moved towards Murud Beach for outdoor sports. Different groups played Matches of Football and Cricket. In the End there was a Final match of Tug-Of-War. Everyone was eagerly waiting to take a Dip in the Sea. Finally the time came, everyone enjoyed to their heart full in the sea water, lots of Enthu and Excitement. Everyone been reassembled on the shore & started to move towards cottage.
After getting fresh & having Tea offered Namaz-e-Magrib & Namaz-e-Isha. Then came the cultural night, Students showed their Talent on Stage in the form of Drama & mimicry. Now it’s time for “Aap ki Adalat”, in this Br. Javed Shaikh was the Lawyer from the Delegates Side whereas Br. Altaf Shaikh (Secretary SiO-Mumbra) was from the Offence side. Janaab Abdul Waheed Shaikh Sahab was the Judge for the night. Two proposed their Cases & finally a lot of fight Delegates side won. Offence was charged with some sort of compensation (in the form of sweets)  for their sins. With this Day-2 ended up.


Day-3(29th Apr-2012):- Day began with Namaz-e-Fazr followed by exercise by Br. Hamidullah Shaikh (President SiO-Mumbra).
Sports events like Sack Race and Aata Race was next. Now after this all had their Breakfast and Boarded bus to move towards Janjira Fort. Reaching the port all Delegates in their respective groups took Sail-Boat for fort. In the Fort Br. Zeeshan Chikte (IFC Secretary SiO-Mumbai Division) gave a brief history of the fort, then enjoying the sceneries, infrastructure and culture assembled at a place where Br. Javed Shaikh (Ex. President SiO-Mumbai Division) gave a small Lecture on “Your Friends Your Mirror”. In which he asked us to take very wise decision before making a friend. You should know the person to whom you are making your friend. He told us a hadeeth and related it practically. He said either a friend will make your Jannah or take you to Hell. With the end of his speech everyone again enjoyed the scenic views of fort and finally returned back to Cottage.
There after offering Namaz-e-zohar and Namaz-e-Asr Janab Zafar Ansari Sahab (Ameer-e-Maqami JIH-Mumbra) made some comment on the topic “Life After Death”. In which by giving example of Murud Fort told that no one will live forever, very obvious everyone has to die one day. He explained about the blindfaith of rebirth & meaningless concept of punishment after rebirth in this world. He said that if one doesn’t even remember what he did in his last life then there’s no meaning of punishment in his next life, this is all rubbish. He told that Jannah or Jahanah it’s all decided and is all in the hands of Almighty Allah.

With the end of the speech all had their lunch. Next was a Lecture by Br. Shaheen Khalokhe (President SiO-Bhiwandi) on “How To Plan Your Life”. In this he first explains the words Life and Plan, using this he asked to plan our life. He asked to focus to what you decide & then work hard for the same. Everything should be step-by-step. Also requested not to follow just looking that someone is happy with what he did. Make your own decision.
Next Janaab Abdul Waheed Shaikh Sahab (Ex. President SiO- Mumbai Division) covered the topic “Kirdaar Hamara Hathiyar”. After this Br. Abdussalam Malik (Member of DAC-Mumbai Division & Member of ZAC-Maharashtra South Zone) motivated students on topic “Need Of SiO”. He explained the need of a Tahreek & what SiO is & what it does. He even told that VIC is just a small activity, there are many more things that SiO does.
Prize Distribution was the next event, soon after that Br.Minhaj Syed (VIC-Incharge) gave a vote of thanks. After him Br. Hamidullah Shaikh (President SiO-Mumbra) addressed students with his small and heart touching speech.
Program for the day and hence for VIC-2012 ended with Dua by Br. Ziya-ul-Islam (Asst. Webmaster SiO-India & Member of DAC-Mumbai Division).

After packing their bags and offering Namaz-e-Magrib and Namaz-e-Isha all boarded the bus to return back home. All Volunteers and Speakers stood on the Delegates way toward bus in a row and greated each other with a request of Duas.
With this Our 3 Day Historic and Unforgettable Vacation Islamic Camp from Mumbra & Bhiwandi for the year 2012 came to an End.
“May Almighty Allah Accept All Our Efforts and Grant Us with Paradise”-Ameen
By Mirza at May 01, 2012